How to bath a dinosaur: why analytics could safeguard 90% of the succes of IOT

If you have missed the enormous attention around the Internet of Things (IoT), you probably have been in temporarily hibernation. IoT is with you, it is with me, with them …. IoT is everywhere, and we just even got started. The Internet of Things has the potential to fundamentally shift the way we interact with our surroundings: the fact that IoT can electronically monitor and manage physical objects, allows for data-driven decision taking. It will allow to optimize system’s performance, create value with new business models, save people’s time and increase quality of life.

Internet of Things defined: To define IoT we can say IoT is as sensors and actuators that are connected by networks onto computer systems. These computer systems are capable of monitoring the “health” (in the widest sense) and actions of these connected sensors and machines. Connected sensors can also monitor our natural world, people and animals. Typically left outside the definition of IoT are objects in which sensors are primarily purposed to receive intentional human input, such as smartphones where data input where data input primarily comes through a touch-screen, or computer systems where the sensor itself is the keyboard and/or mouse.

This year we already have 4.9 billion connected things expected to grow at 50 billion in 2020. Focusing in first instance at consumer markets with sensors in for example fitness machines to monitor our heartbeats and calorie-breaking, IoT is now starting at the B2B segments at much higher economic impact. IoT technologies and initiatives are deployed at vertical industry segments and staggering speed expected to take 70% of the total IoT impact in 2015. For the latter an example are the smart cities using IoT-driven environmental monitoring or intelligent traffic management.

McKinsey research however proved that the current hype of IoT is probably understated……… uhh understated .. ? .. Yes, definitely understated, since the full economic impact estimates of IoT is valued at $3.9 -$11.1 Trillion per year in 2025.

Voila, the cards are on the table. A potential economic impact of IoT in 2025 which represents a value that is some 10% of the World economy. If you were still in hibernation, you’d be probably awake now: $3.9 -$11.1 Trillion per year in 2025.

Reference and factual information on the Internet of Things is available here.

So where is IoT today and how come we are only at the beginning of the economic impact? Today’s IoT application are either very consumer-centric or they are limited to vertical industries:

IoT applications that we see today are often consumer-centric. Think about the fitness equipment that allows to communicate on the heartbeat of the user, or home thermostats that allow to optimize and program heating. The connected kitchen already is one step more complex since it broadens connections towards the suppliers of groceries. They have great visibility since they directly affect our lives or behavior.

Within vertical industries we today see some deployed IoT applications. The hotel sector for example is well known to have sensors on most of the rooms equipment like soap dishes or toilet garnishes helping to better quality and customer experience. Hotels can complement outage when needed, and - added to their logistics systems – predict, automate and utilize order and stock of the room equipment.

In order to maximize benefits from IoT, businesses need to connect the individual IoT systems and make them interoperable. Connected IoT applications strengthen each other when insights gained from them are combined. To really value to economic impact of interoperable IoT applications we need to introduce the concept of settings. Settings are sceneries – seen through the lens of a domain instead of a process - that are cross-industry and allow to review the impact of the interaction between IoT applications. If we value IoT thought the lens of a compressor manufacturer, we could see for example the benfits towards process efficiency or cost optimization. If we look through the lens of settings, we can see things like supply chain optimization, or even new business models like offering compressor facilities as a service.

A closer review of the settings show 9 settings where IoT creates value that is estimated between $3.9 -$11.1 Trillion per year in 2025. These settings are:

Think as wide as you can with the above summary. If I mention for example vehicles, I do not only focus on the obvious preventive maintenance or navigation area. Also think for example on pre-sales analytics: For example, a truck manufacturer can monitor the loading levels on the trucks sold to various fleet owners. Say a fleet uses a truck model with a 16-ton capacity, but daily use never exceeds eight tons per truck. The truck manufacturer can then cross-sell a nine-ton truck to the fleet operator, which can improve fleet fuel efficiency and make the fleet operator a more loyal customer. Another example in worksites is Usage-based design: IoT could provide manufacturers with relevant data to improve R&D: Based on actual usage data, manufacturers can determine what functions should be added, what parts could be improved, and what features can be removed. This can lead to increased sales and higher margins. Additionally, the stream of IoT data can become a business opportunity itself, as jet engine suppliers have shown.

As the infographic shows, research predicts that the biggest settings for economic impact are Factories, Human and Cities. China is expected to be one of the largest users in Factory setting.

A second important conclusion is that most of the IoT data collected is either not used today, and the data that is used is not leveraged to its full extend.

The 2 big types of opportunities driven IoT applications are:

Most of the collected IoT data today, is not used or even monitored. The data that is used, is primarily focused on real-time control or anomaly detection. As such the first opportunity is to start monitoring the data in “its broader context” and transfer this into insights. The IoT sensor data can be used to optimize production processes. One of the applicable areas of improvement is preventive maintenance based on predictive analytics.

Mainly driven by the interoperability of IoT applications, new business models drive economic value. Since IoT applications for example allow the manufacturer to monitor both the behavior as the usage of their equipment used by their customers, they can start offering their products “as a service”. It will permanently change the bases of competition. As an example we could take a compressor manufacturer that has built-in sensors in its compressors allowing them to monitor health and utilization of the compressor and its output (compressed air). The can now start offering their product “compressed air” as you can see this example.

A well-known tire manufacturer puts sensors in all of their truck tires monitoring coordinates, health and condition. Instead of providing this data to their customers, they sell (!) it back offering information on preventive maintenance but also connecting their information with truck assistance companies who can offer repair services if needed.

Another way of interoperable IoT creating new business models is the Logistics and Cargo industry using AIS track data of ship-cargo. By comparing their own ships traffic progress (using predictive analytics on weather models and GPS coordinates) with those of competitors, one of the leading Cargo companies is now contacting potential clients suggesting that they can shorten delivery compared to others. They combine the AIS IoT application with Air traffic IoT applications to offer clients a better deal.

The two core opportunities described above will strongly rely on business analytics if they both want to be successful. Let me sift into pieces, to answer why. It all comes down to apply the closed loop portfolio of analytics towards the Internet Of Things:

If there is one component of business analytics that affects the success of interoperable IoT it is predictive analytics. It will play a core role in recognizing, prioritizing and interpreting sensor data that is relevant:

Tony Fraizier, SVP at DigitalGlobe: “What we want to do is go from reporting on events to anticipating them, and ultimately changing outcomes," Frazier said. "The more we can get ahead of those events, the more we can equip the people who are going to take action." For example, he noted that if a military special-forces team is being sent on a mission into an urban setting, "you want to be able to say who can see them there or pinpoint safe places to land" based on current information. He also cited efforts to police fishing exclusion zones in the world's oceans and seas; because of the vast amount of geographic space that's involved, having data analysts comb through satellite images in search of illegal vessels could take "days or weeks to get an answer." More prosaically, real-time counting of cars in parking lots at shopping malls could provide an indicator of retail traffic, said Frazier, who was general manager of DigitalGlobe's Insight analytics business until the end of 2014 and is now in charge of its offerings for U.S. government agencies.

The insights that interoperable IoT application can bring, add value to the planning process and as such to the office of the CFO. Smart Cities might adjust their lightning schedules based on real-time crime data ensuring better security. Combined with predictive models it allows cities to better forecast electricity costs. Manufactures benefit from utilization data of their sensored-equipment to better forecast sales and repairs.

As concluded earlier, most of the IoT data today is either not used or not exploited to its full extend. Though there is always room for improvements, I believe that today’s analytics tools are equipped to interactively monitor IoT data. The reason for not exploiting its full potential is either due to a lack of using predictive techniques deciding what data is relevant, plus the “consumers” of the IoT data are not ready yet to further explore with enriched data from non-sensor sources. Monitoring, enriching and blending IoT sensor data with non-sensor data is phase which will get its momentum this year.

A special place in IoT applications is prepared for the alerting functionality of analytics monitoring: using Event Stream Processing (ESP) techniques it is possible to apply event based alerting in real-time. It means that sensor-data can act as trigger for follow-up events. You may think in the widest possible way when it comes to alerting. Events can trigger other processes and start a new chain of activities. But it could also trigger to run analyses or collect new insights. The technique of ESP is ground-breaking and will boost IoT enormously. An example of an ESP system is below.

Reference and factual information on the Internet of Things is available here.

the Rule of 7even 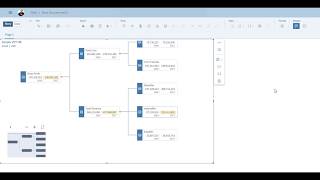 On the road with Analytics Cloud - Planning & Cost Allocation, and a bit of closed loop insights

SAP Lumira 2.0 Why interoperability between BI styles and use cases is a big deal

the Rule of 7even

an outlook to on premise data discovery and authored dashboarding with SAP Lumira 2.1- a journey tha

Can I add something to this discussion, please? - Commenting with SAP Analytics Cloud.

Making of the Intelligent Enterprise